This workshop, collaboratively organized by the Institute of Environmental Social Sciences and Geography at the University of Freiburg and the EnJust Network for Environmental Justice, aims at fostering debate and learning processes about the roles, responsibilities and approaches of the emerging inter-and transdisciplinary environmental justice movement composed of scholars, activists and decision-makers. The workshop will bring together individuals from these groups, who self-identify with the environmental justice movement, in order to critically engage with current research, concrete ideas, practices, and methods for bridging the divides between environmental justice research and practice, between activism and scientific study, and between collective and individual decision-making. It will provide a space to collectively explore and deepen transdisciplinary work and activist-research for a more just and fairer future.

It is with great disappointment that we need to inform you that this year’s International EnJust 2020 Workshop in Freiburg will not take place.

The situation with COVID-19 has changed dramatically over the past weeks, across Europe and the world. To ensure the safety of participants and avoid further uncertainty about travel bookings, the EnJust 2020 team and the EnJust Network coordinators have jointly decided to postpone the May 2020 event.

This is a huge disappointment to all involved. After months of preparatory work, we were very much looking forward to an exciting conference program, with lots of highly topical and thought-provoking contributions. Given the severity of the corona virus outbreak, however, we don’t see any other option than cancelling the event.

Our plan is to postpone the workshop by one year, so make sure to already reserve 19th to 21st May 2021 in your diaries! Those of you whose abstracts were accepted for this year’s workshop will be first in line to present the contributions next year instead. We will be in touch with you later this year with further details on this process and hope that many, if not most, of this year’s presenters will be able to join us in Freiburg in May 2021.

If you have already paid your registration fees, these will be reimbursed to you. We will contact you in the coming weeks in this regard.

If you need an official letter for insurance purposes stating that the event was cancelled by the organisers, please send an e-mail request to: enjust2020@geographie.uni-freiburg.de

Please don’t hesitate to get in touch with us if you have any other questions regarding the changed plans.

Stay well and safe and preserve some of your excitement about the workshop for 2021! We look forward to seeing you in Freiburg next year.

Coline Chardon, Hartmut Fünfgeld, Benedikt Schmid and all members of the EnJust 2020 organisational team in Freiburg

We are happy to announce that we have received a large number of high-quality submissions for the EnJust 2020 workshop to take place in Freiburg from May 27-29. Aside from a broad variety of paper presentations and posters, the programme will include a number of interventions and participatory formats. Furthermore, we are happy to announce Isabelle Anguelovski as our keynote speaker.

As of February 15, it will be possible to register for the workshop. Please note that due to the limited room capacity of the workshop venue places for those without own contribution (paper, poster, or intervention) are limited.

To register, please use the following link: Registration for EnJust 2020 - International workshop on Environmental Justice. (Link will be activated on Feb 15).

Upon completing the registration, you will receive an email asking you to transfer the registration fee to the EnJust 2020 Bank account. Please note that registration is not complete until the full amount has been transferred (for bank details see email)

The third biennial conference of the Political Ecology Network (POLLEN)
will be held in Brighton, UK on 24-26 June 2020. EnJust members Judith Bopp and Jonas Hein will host a workshop on the challenges of critical knowledge production for a transformation: perspectives and experiences.

The contested notion of ‘nature’ is one of the central themes in political ecology, and the third biennial conference of the Political Ecology Network (POLLEN), Contested Natures: Power, Possibility, Prefiguration, aims to explore plural natures and plural futures as sites of struggle and possibility whilst critically engaging with and ‘unpacking’ multiple and overlapping crises of our times.

More than 60 scientists from 14 countries met at the University of Kiel from 6 to 8 June for the workshop "Narratives and Practices of Environmental Justice" to exchange views on issues and questions of environmental justice. A small and affluent part of the world's population claims an ever increasing share of the earth's resources and at the same time pollutes and destroys valuable habitats on land and in the oceans. Those groups that are least responsible for developments are often affected most. How can we achieve a more equitable approach to environmental crises? Which dimensions of justice (e.g. distribution of costs and benefits, recognition of identities, participation in political decision-making) are affected and what different concepts of justice (equality, needs, merit, etc.) stand in opposition to each other? On the one hand, the workshop brought together international researchers from the fields of geography, social, political and legal sciences and environmental ethics. On the other hand, the exchange between science and society was also to be promoted in order to bring the topic more intensively into the public debate. For this reason, artists and activists were also among the participants. Last but not least, the workshop served as a starting point for the new international network on environmental justice (EnJust - Network for Environmental Justice), which was founded on 8 June and which is to serve as an interface between different scientific disciplines, politics and civil society in the future. More information about the network, which of course always welcomes new members, can be found at www.enjust.uni-kiel.de, #enjust or via email at enjust@geographie.uni-kiel.de.

Further partial aspects of this broad field were then addressed in the following two days within the framework of seven thematic panels or 31 lectures respectively. The session "Conceptualizing environmental justice" was devoted to the further development of the theoretical basis of environmental justice. Different principles of justice, such as participation, Rawls' goal of fairness, the capabilities approach or the principle of equality were critically examined and examined with regard to their suitability to serve as a basis for discourses on justice. The session on "Social movements and counter narratives" dealt with examples of civil society movements from various countries (including Argentina, Mexico, Germany, Maghreb states), each of which demands environmental justice in a different way, using different discourse elements and narratives. The panel on "Justice dimensions of climate politics" dealt with the justice-theoretical implications of strategies for dealing with climate change. Be it REDD+, Carbon Pricing, Natural Hazard Management or climate adaptation strategies: All these approaches have far-reaching consequences in terms of the distribution of costs and benefits and other justice dimensions. The session on "Marine justice" highlighted environmental justice in the maritime context. Questions of international law, the cross-border management of natural resources or the interests of fishermen are always related to the issue of the commons, which has shaped the social science discussion of environmental problems for a long time. The health sciences, which were the focus of the session on "Public health and environmental justice", have long been concerned with the question of the extent to which environmental burdens are unequally or unfairly distributed, and with the various possibilities of scientifically proving these social patterns and analysing them in terms of their effects. The panel on "Justice dimensions of environmental politics" examined various examples of environmental and nature conservation policy measures (nature reserves, payments for ecological services, etc.) with regard to their implications for a just society. At the session on "Environmental conflict and transformation", studies were presented that aim to contribute to a better understanding of the social and cultural dynamics of environmental conflicts by using very different methods (discourse analysis, Q-method, participatory theatre, etc.).

In addition to a world café, where the social relevance of research on environmental justice was discussed, there was a panel discussion with high-calibre participants from planning, science, civil society, law and party politics. Participants were: Roda Verheyen, a lawyer from Hamburg who is currently pursuing several climate lawsuits in German courts, Jean Carlo Rodriguez de Fransisco from the German Development Institute, Daniel Morchain, who worked for Oxfam for a long time and who is now working at the International Institute for Sustainable Development, Gunnar Maus as representative of regional planning in Schleswig-Holstein and the chairman of the Green Party in Schleswig-Holstein, Steffen Regis.

Parallel to the events, an exhibition of photographs by Barbara Dombrowski, whose work deals with the lived reality of climate change, took place in the foyer of the Wissenschaftszentrum Kiel. With her large-format portraits and everyday scenes from Kiribati, the state in Oceania, whose islands are directly threatened by sea-level rise, she gives the otherwise abstract phenomenon of climate change a human face without showing the people as victims. This coexistence of scientific discourse, social debate and artistic challenge gave the workshop its special character. There is concrete hope that this workshop will mark the beginning of an intensive and sustainable cooperation between national and international scientists and activists who are dealing with issues of environmental justice.

On the occasion of #WorldMigrationDay we'd like to show you how #climatechange can be related to #Migration. At the same time it's important to discuss potential relations quite critically. Find out more in "Climate Change and Migration" by @siljaklepp. https://t.co/jCPvTaT5Hd 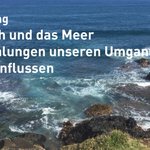 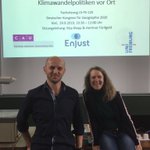